Back Haemophilia with inhibitors

The development of inhibitors in a patient with haemophilia (haemophilia with inhibitors; HwI) complicates treatment management, limiting treatment options and resulting in poorer outcomes.1 Patients with haemophilia A (HA) or haemophilia B (HB) who are exposed to products that contain coagulation factors should be screened for the presence of an inhibitor whenever a reduced treatment response or lower than expected factor recovery levels are observed.2 The inhibitor titre will determine treatment options for acute bleeds, and surgical and dental procedures need to be managed with care.

Accurate diagnosis of haemophilia depends upon coagulation assays, which are performed according to strict protocols and procedures, and which require specific knowledge and expertise, as well as quality assurance.2

Coagulation screening, including prothrombin time (PT) or activated partial thromboplastin time (aPTT) assessment, is performed for any patient with a suspected bleeding disorder.2 Both the PT and the aPTT should be normal in a patient with HA or HB adequately treated with replacement therapy. The sudden appearance of a prolonged aPTT suggests the presence of a FVIII or FIX inhibitor.

A mixing test is then required to confirm the presence of an inhibitor if the mixing test is not corrected following an adequate incubation time.2 The Nijmegen-modified Bethesda assay is then performed to quantify the inhibitor titre.3

In patients with HwI, the inhibitors are alloantibodies that exhibit linear type I kinetics, and may increase or decrease over time.3,5 Some inhibitors are transient, exhibiting spontaneous remission, and some disappear in response to repeated intensive exposure to FVIII or FIX.6 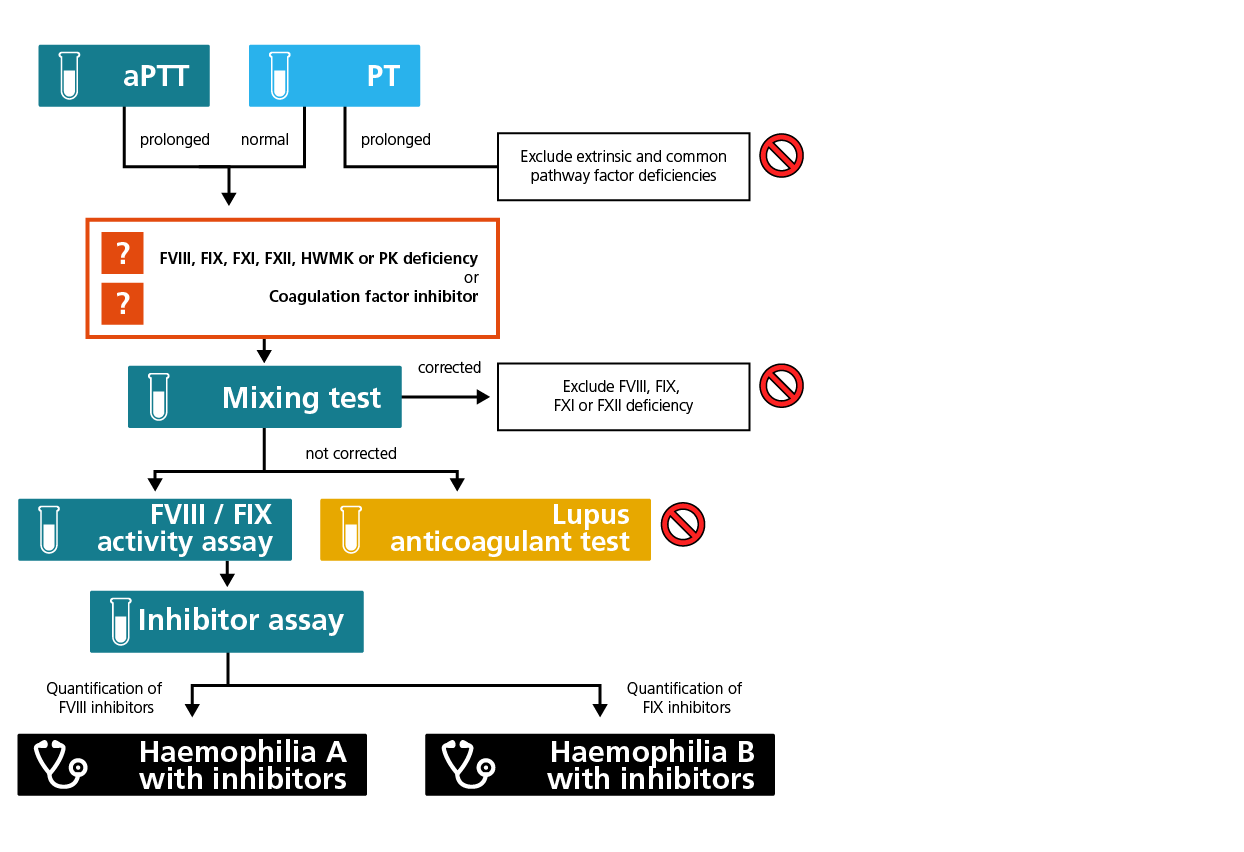 Algorithm for the laboratory diagnosis of haemophilia A or B with inhibitors.

Mixing tests can be used to confirm the presence of an inhibitor. Test plasma is mixed 1:1 with normal plasma (containing 100% of the normal FVIII or FIX levels) and incubated at 37oC for 1–2 hours. A prolonged aPTT after 1–2 hours using a mixture of normal and patient plasma is indicative of allo- or autoantibodies; however, one-stage clotting and two-stage chromogenic factor activity assays should be performed in parallel.

The Bethesda assay, initially described by Kasper and colleagues in 1975, measures the amount of FVIII or FIX that is inactivated when plasma is incubated with an external source of FVIII or FIX.7 Very low-response inhibitors may not be detected using this assay.2 Autoantibody titre and residual FVIII or FIX activity levels correlate poorly with clinical severity and bleeding risk, therefore treatment decisions should not be based on these laboratory values.

Phospholipid-dependent tests can be affected by the presence of anti-phospholipid antibodies, also called lupus anticoagulant, which are not directed against specific clotting factors and typically lead to prolonged aPTT, or prolonged PT in some patients.8 These antibodies belong to a heterogeneous family that react with epitopes on proteins complexed with negatively charged phospholipids.8

In order to exclude the presence of a lupus anticoagulant, several specific tests are available, however more than one test should be performed as no single test is sensitive for all lupus anticoagulants.9 International Society of Thrombosis and Haemostasis (ISTH) guidelines recommend the use of the diluted Russell viper venom time (dRVVT) and an aPTT test with silica as an activator and low phospholipid content.9 Confirmatory tests with increasing concentrations of phospholipids based on the screening tests need to be performed to verify the phospholipid-dependence of the lupus anticoagulant.9

Guidelines from the World Federation of Haemophilia (WFH) recommend that inhibitor screening is performed for all patients who have received intensive treatment with clotting factor replacement therapy for >5 exposure days (EDs), within 4 weeks of the last infusion.2 Any adult patients with >150 EDs who do not respond to therapy, but were previously responsive, should be screened for inhibitors.2 For paediatric patients with >150 EDs to clotting factor replacement therapy, screening for inhibitors should be performed every 5 days until 20 EDs, every 10 days until 50 EDs, and then at least twice a year until 150 EDs.2 In addition, the presence of inhibitors should be investigated prior to surgery, or if unexpected results emerge from factor recovery assays.

3. Kasper CK. Diagnosis and management of inhibitors to factors VIII and IX: an introductory discussion for Physicians. World Federation of Hemophilia (WFH) 2004;34:1-26.

9. Pengo V, Tripodi A, Reber G, et al. Update of the guidelines for lupus anticoagulant detection. Subcommittee on Lupus Anticoagulant/Antiphospholipid Antibody of the Scientific and Standardisation Committee of the International Society on Thrombosis and Haemostasis. J Thromb Haemost 2009;7:1737-40.