A congenital bleeding disorder may be suspected based on a clinical bleeding diathesis from an early age in patients with a severe factor (F)VII congenital deficiency (FVII CD). Individuals with a milder bleeding phenotype may be identified incidentally in the context of invasive procedures or traumatic injury and unexplained or abnormal bleeding. Both situations should prompt an initial investigation using laboratory screening assays.1,2

An isolated prolonged prothrombin time (PT) and a normal activated partial thromboplastin time (aPTT) provide the first laboratory evidence for a FVII CD because this affects only the extrinsic coagulation pathway. However, PT reagents have variable sensitivity and milder forms of FVII CD may go undetected. This suspicion can be confirmed using a FVII activity assay and molecular analysis to identify the responsible mutation.1,2 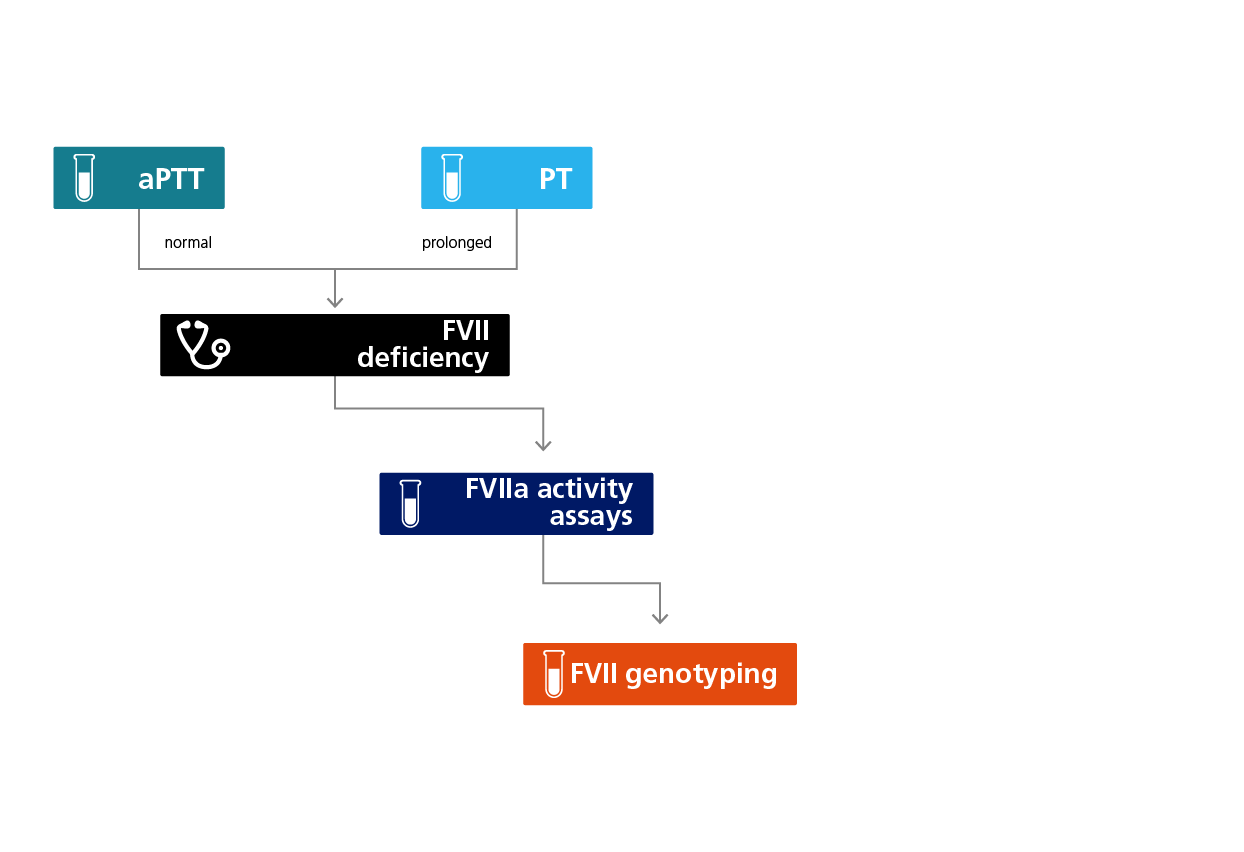 Algorithm for the laboratory diagnosis of FVII deficiency.

Results from PT and aPTT screening tests can be interpreted in combination to identify and exclude certain coagulation disorders. A normal aPTT excludes moderate or severe deficiencies in the extrinsic or common coagulation pathways (i.e., FV, FVIII, FIX, FX, FXI or FXII). An isolated, prolonged PT immediately suggests a FVII deficiency. Prolongation of the international normalised ratio (INR) may depend on the level of FVII in the plasma. Aside from genetic lesions, other factors that may influence the level of FVII activity include liver disease, a vitamin K deficiency or treatment with vitamin K antagonists.1,2 For some molecular defects of FVII the abnormality is not detected with all reagents so that the PT may be normal with one reagent but abnormal with another. In this case the results obtained with reagents containing human tissue factor (TF) are more likely to correlate with the clinical picture.

Activated FVII (FVIIa) is present in plasma at a concentration of 5–15 ng/mL in normal individuals, representing only about 1–3% of the total pool of FVII, and with a half-life of 2–3 hours. FVII activity assays serve to confirm a lack of FVII/FVIIa activity. A clot-based assay uses a soluble, recombinant truncated TF (TFF) that is unable to activate FVII zymogen and therefore measures FVIIa activity in a given sample. The same assay can also be used to measure thrombin generation or FXa activity using fluorogenic substrates. A separate fluorogenic assay that also uses a FXa-based fluorogenic substrate activates FVII to FVIIa and then measures the total activity. Together, therefore, the relative proportions of activated and zymogen FVII can be elucidated.2,3

The choice of assay reagents to measure clot assay-based FVII activity is critical, because the origin of the thromboplastin used in the assay may influence the results. In addition, residual amounts of FVII activity within factor-‘deficient’ plasma may reduce the sensitivity of assays in the lower activity range. Assay calibration using a plasma standard and the introduction of recombinant TF and synthetic phospholipid preparations have reduced the inter-laboratory variability associated with both of these components.1-3

A molecular genetic analysis of the FVII gene (F7) represents the gold standard to confirm a diagnosis of FVII CD. A full F7 sequence following conventional PCR amplification identifies the genetic lesion in most cases. The analysis is also useful in the presence of a discordant bleeding phenotype and FVII activity or an unclear inheritance pattern. A pre-natal diagnosis using umbilical cord blood in the presence of a family history or bleeding is also possible.1