A prolonged coagulation time determined using a clot-based activity assay is usually associated with coagulation factor deficiencies or the presence of inhibitors. Clotting assays can either be used for global assessment or for specific testing of the activity of single coagulation factors. As the sample material, plasma prepared by centrifugation of citrated whole blood is used. Within the sample, the citrate acts as an anticoagulant by binding calcium ions, the presence of which is essential for the enzymatic processes leading to clot formation. Accordingly, re-calcification of the plasma is needed to initiate the clotting process in vitro.

The two main types of clotting assays are:

Clotting assays measure the time required for citrated plasma to clot after initiation of either the extrinsic (PT) or the intrinsic pathway (aPTT) of the plasmatic coagulation cascade.

The extrinsic pathway is activated by the addition of complete thromboplastin, a mixture of tissue factor (TF), phospholipids and CaCl2, to the plasma samples.

In contrast, the intrinsic pathway is activated by the addition of a surface activator such as silica, kaolin or ellagic acid and a diluted phospholipid-enriched extract of thromboplastin lacking TF, historically referred to as partial thromboplastin. After contact activation has taken place, CaCl2 is added to initiate clot formation. 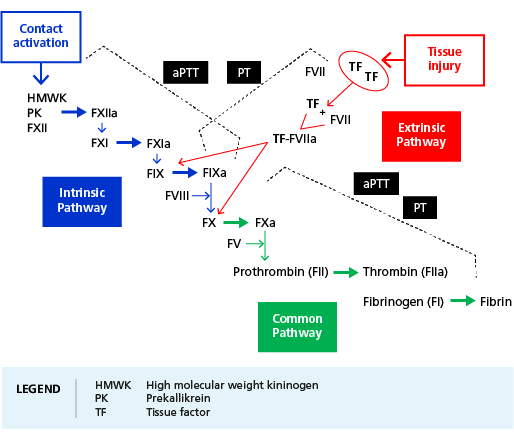 Since the PT and the aPTT address different initial pathways, the parallel application of both assays is useful to pin down the underlying cause of prolonged clotting times. For example, a prolonged aPTT but normal PT indicates a factor deficiency within the intrinsic pathway. In contrast, a prolonged PT but normal aPPT indicates a reduced FVII-activity.

Both, the PT and the aPTT assays are also used for the monitoring of anticoagulant treatment. While the PT is used to monitor the application of vitamin K antagonists, the aPTT is usually applied to guide treatment with unfractionated heparin.

Furthermore, mixing of patient and normal plasma before the introduction of samples to the assays (mixing tests - see below) may be performed to discriminate between factor deficiencies and the presence of inhibitors such as, for example, antiphospholipid antibodies or coagulation factor inhibitors.

PT1 is a simple and accurate test used to determine the clotting tendency of plasma by measuring the fibrin clotting time facilitated by the extrinsic and common coagulation pathways.

A prolonged PT can be correlated with anticoagulant treatment or underlying comorbidities. In the absence of these features, a prolonged PT can be associated with a congenital monofactor deficiency in factor (F) VII or common pathway factors I, II, V or X. Results are expressed in terms of time to clotting in seconds, and normal values range from 9–14 seconds.

In order to compensate for the inherent variability associated with the use of different PT assay reagents and instruments in different laboratories and to facilitate comparability, the PT is normally expressed as an international normalised ratio (INR). The INR compares the PT of a test sample with a normal control sample and applies a manufacturer and batch-specific international sensitivity index (ISI), which adjusts for the sensitivity of the assay reagent relative to an international reference standard.

An aPTT1 measures the functionality of the intrinsic (or contact-activation) and common coagulation cascade pathways. The clotting time measured is compared to that of control plasma samples to determine whether a delay in clotting time exists. Normal aPTT values depend on the individual laboratory setup and the reagents used, but are typically between 22–40 seconds. 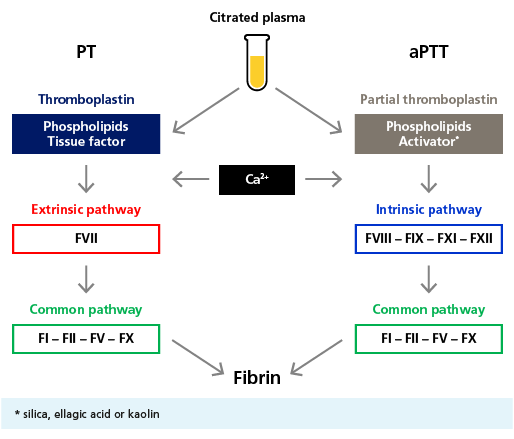 Mode of action and pathways assessed by the PT and aPTT assays.

A specific soluble recombinant tissue factor (sTF) that lacks the transmembrane domain can be used to measure plasma FVIIa levels. Unlike wild-type TF, sTF has the useful feature that the molecule binds to FVIIa, but cannot convert FVII zymogen to FVIIa. sTF can therefore be used to assess the amount of FVIIa in a sample, because clotting time is directly proportional to the amount of already-active FVII and is independent of the presence of inactive FVII zymogen.

Platelet-poor, citrated test plasma is diluted / mixed with FVII-deficient plasma. Subsequently, a reagent containing sTF, phospholipid vesicles and CaCl2 is added to initiate clotting. Clotting times can then be converted to FVIIa levels using a standard plasma reference curve. A calibration curve also can be generated using a known concentration of plasma-derived or recombinant FVIIa that has been calibrated against an international FVII concentrate standard. 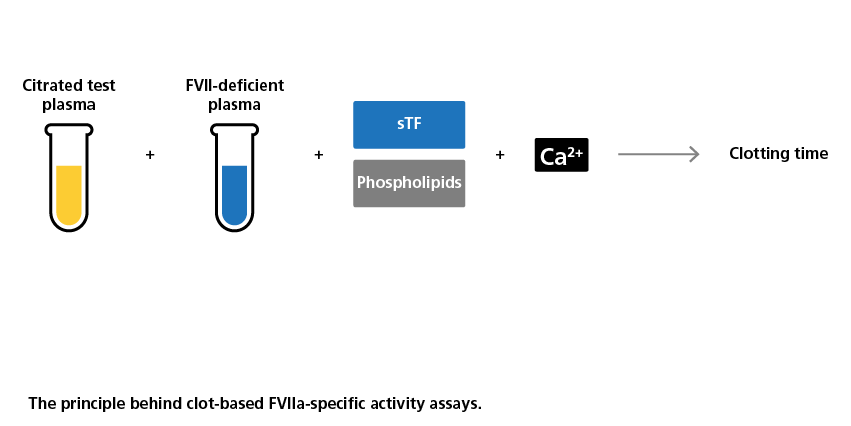 Any residual FVIIa in the FVII-‘deficient’ plasma, regardless whether immunodepleted or from congenitally deficient donors, may have an impact on the usefulness of the assay, particularly in samples with very low FVIIa activity. Contact with non-siliconized glass and cold storage or solutions should be avoided to prevent inadvertent activation of FVII zymogen in test samples.2

Mixing tests with normal plasma are used to differentiate between an inhibitory antibody and a factor deficiency. In these assays, patient plasma is mixed with pooled normal plasma in a ratio of 1:1.

Failure of normal plasma to correct the aPTT by more than 50% is usually taken as evidence that an inhibitor is present,3 although in some laboratories other definitions are used, and there is no international consensus. FVIII inhibitors are time and temperature-dependent, therefore mixing studies should be incubated for 1–2 h at 37°C.3,4 A mixing study performed without incubation for 1–2 hours or at a lower temperature (for example room temperature) may result in correction of the aPTT and the inhibitor diagnosis potentially missed.

Mixing tests can, for example, be used to identify both alloantibodies to FVIII or FIX in patients with haemophilia A (HA) or B (HB), respectively, and autoantibodies to FVIII in patients with acquired HA (AHA). Correction of the aPTT with normal plasma does not exclude a FVIII inhibitor, therefore if the clinical picture is suggestive of an inhibitor, further investigation using an inhibitor titre quantification (Bethesda) assay is warranted.

Both test plasma and reference plasma are diluted and mixed with factor-deficient plasma, typically plasma that contains all coagulation factors in normal amounts except the factor of interest. Factor-deficient plasma can be generated by immunodepletion or donated blood from persons with, for example, severe HA (completely lacking FVIII) or HB (FIX). An aPTT assay is then performed on each dilution mixture.

A PT (in case of factors II, V, VII or X) or an aPTT assay (factors VIII, IX, XI, XII, HMWK or PK) is then performed on each dilution mixture.

PT or aPTT clotting time data of the reference standards are plotted on a log (factor activity)-linear (clotting time) graph and interpolated in order to allow the calculation of factor activity in the original test sample based on the measured clotting times of the sample dilution(s).

In case different dilutions of the test sample have been tested, non-parallelism of the interpolation lines would indicate the presence of an inhibitor rather than a factor deficiency. 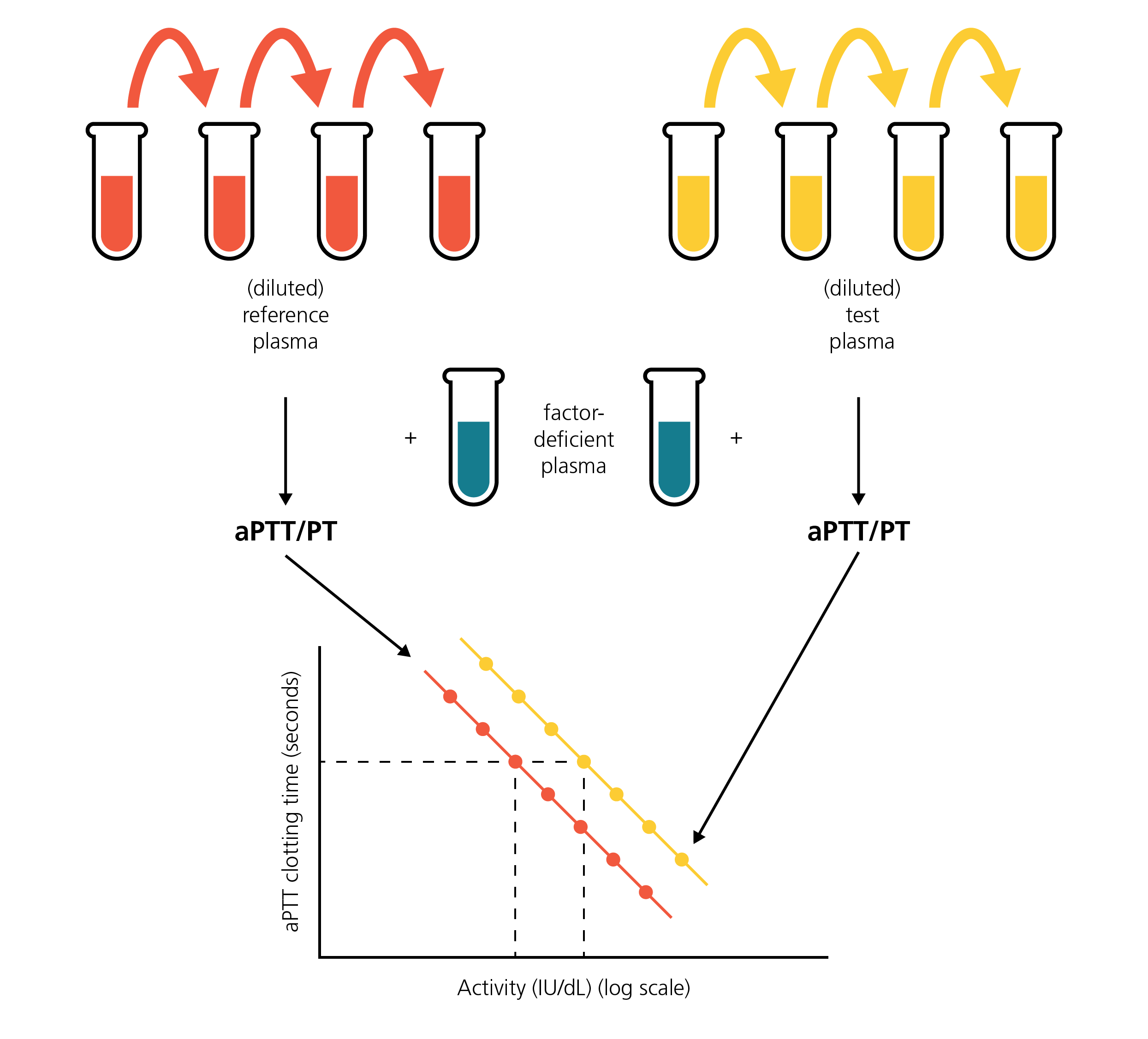 The principle behind PT- or aPTT-based factor activity assays.

3. Kasper CK. Diagnosis and management of inhibitors to factors VIII and IX: an introductory discussion for Physicians. World Federation of Hemophilia (WFH) 2004;34:1-26.