The VWF ristocetin cofactor activity (VWF:RCo) assay measures the ability of VWF to bind to platelets using an instrument (typically an aggregometer) to measure platelet aggregation in the presence of the antibiotic ristocetin. This assay is typically performed in conjunction with a VWF antigen assays to calculate a ratio of VWF level vs VWF function in the classification of VWD type 1, 2 or 3. Intra- and inter-laboratory variability associated with the VWF:RCo, however, can increase the potential for misdiagnosis.1-5

The VWF:glycoprotein-IbR (VWF:GPIbR) assay uses ristocetin to trigger VWF binding to wild-type, plasma-derived or recombinant GPIb. This assay is available for automated applications and can be used as a precise and sensitive alternative to the VWF:RCo for measuring VWF activity.5

The VWF:glycoprotein-IbM (VWF:GPIbM) assay can also be used as an alternative to the VWF:RCo assay during differential diagnosis and classification of VWD. Similar to the VWF:RCo and VWF:GPIbR assay, the VWF:GPIbM measures VWF function. However, the VWF:GPIbM measures VWF binding to a modified gain-of-function version of a GPIb protein independent of ristocetin, which can reduce intra- and inter-laboratory variability. The VWF:GPIbM assay is used in conjunction with the VWF antigen assay to build a VWF quantity-to-function ratio for the initial classification of VWD.2-5

The ristocetin-induced platelet aggregation (RIPA) assay is similar to the VWF:RCo assay. However, it is used to distinguish VWD type 2B and platelet-type VWD from VWD type 2A. In RIPA, a platelet rich plasma sample from the patient is exposed to low concentrations of ristocetin using an instrument (typically an aggregometer) to measure aggregation. Samples from patients with VWD type 2B and platelet-type VWD will aggregate under these conditions, whereas samples from normal patients and patients with all other types of VWD will express little to no aggregation.1,4

The von Willebrand factor/factor VIII-binding (VWF-FVIII-binding) assay is used to distinguish the 2N subtype from other VWD type 2 subtypes. This assay uses a modified enzyme-linked immunosorbent assay (ELISA) technique. Anti-VWF antibodies are seeded on a plate and capture VWF when exposed to a patient sample. The plate is then washed to remove endogenous FVIII bound to VWF in the sample. The plate, with the captured VWF is exposed to a known concentration of recombinant FVIII. Finally, an enzyme-linked anti-FVIII antibody is used to measure the concentration of FVIII bound to the patient’s VWF. Patients with VWD type 2N typically have decreased FVIII using this assay.6,7

von Willebrand factor (VWF) multimer analysis is typically performed after initial VWD assays to help define the VWD variant subtype. In this qualitative assay, VWF multimers are separated by size using sodium dodecyl sulphate (SDS)-agarose gel electrophoresis. The multimer distribution is visualised using a labelled antibody that targets VWF. This analysis can also be performed through transfer of the protein from the SDS-agarose gel to a membrane using a Western blot technique. With this method, VWF multimers are visualised using immunofluorescence.6,7 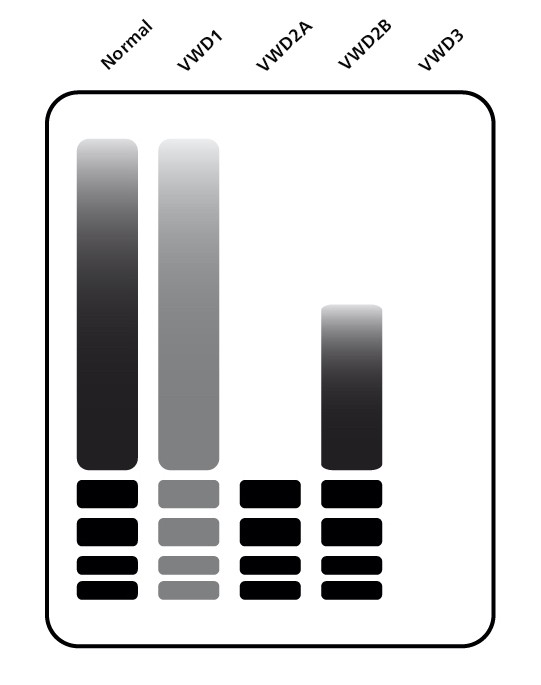