Factor V congenital deficiency (FV CD; 2019 ICD-10-CM: D68.2) is a rare, autosomal recessive bleeding disorder caused by defects in the F5 gene on chromosome 1. FV CD is prevalent at approximately 1:1,000,000 population irrespective of sex, with higher incidences in populations with a high degree of consanguineous marriages. Cases have been reported in Europe, Asia and North America.1-5 FV is a large protein found in both plasma and on platelets that plays a key role in both the intrinsic and extrinsic coagulation cascades. In plasma, FV is activated by activated FX (FXa) or thrombin via cleavage of the B domain. FVa acts as a cofactor for FXa, enhancing the proteolytic activity and accelerating prothrombin cleavage. The platelet form of FV is partially activated, resistant to inactivation and is stored in α-granules bound to the protein MMRN1. FV separates from MMRN1 when platelets are activated at the site of vascular injury. Activated platelets release α-granules, and free FV localizes to the membrane during the assembly of the prothrombinase complex.1-6

FV CD is caused by low quantity or reduced function of FV (activity <10% of normal), and is divided into two classifications. Type I FV CD, (the most common form) is characterised by low FV concentration and mirrored by an equal reduction in FV activity. Type II FV CD is characterised by loss of FV activity with near-normal FV concentration. Mutations in the F5 gene cause FX CD and tend to be individual to families. These can include missense, nonsense or frame-shift mutations.1,2,4,5

In addition to plasma and platelet functions, FV also plays a role in negative coagulation feedback within the intrinsic clotting cascade. Acting as a cofactor for protein S and activated protein C, full-length FV enhances the inactivation of FVIIIa. Thus, specific missense mutations in the F5 gene (such as FV Leiden, FV Cambridge, FV Hong Kong) do not cause deficient FV coagulant activity, but are associated with an increased risk of thromboembolism.1,4 Currently, the only available treatment for bleeding episodes in patients with FV CD is infusion of fresh or fresh frozen plasma.

Symptoms that occur frequently in persons with FV CD, such as mucosal tract bleeding and epistaxis are also common in other rare bleeding disorders. However, symptoms in moderate FV CD (<10% FV activity) can range from mild to severe with infrequent spontaneous bleeding, and do not tend to correlate with residual FV activity levels. Life-threatening central nervous system or gastrointestinal bleeding is rare in severe FV CD (undetectable FV activity).1,2,4,5,7 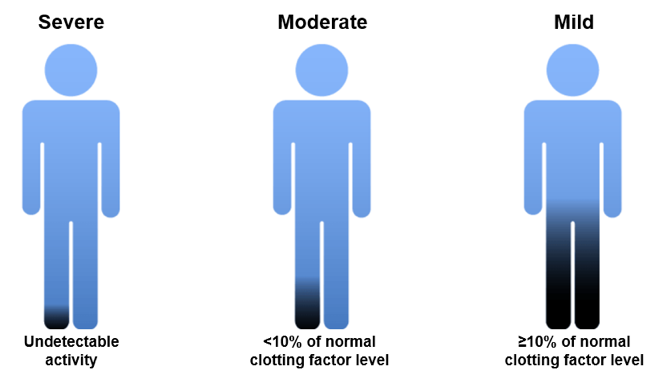 Classification of FV CD according to clotting factor levels7

Severe FV CD usually presents during childhood with moderate to severe symptoms. Umbilical cord bleeding can occur in individuals with FV CD. However, more common symptoms include mucosal bleeding, epistaxis, menorrhagia, bleeding of the oral cavity and to a lesser extent haematomas and haemarthrosis. Patients with moderate FV CD often display a very mild bleeding tendency, with skin and mucosal membrane bleeding being the main symptoms.1,2,4,5